Why Are There Different Color Tennis Balls? 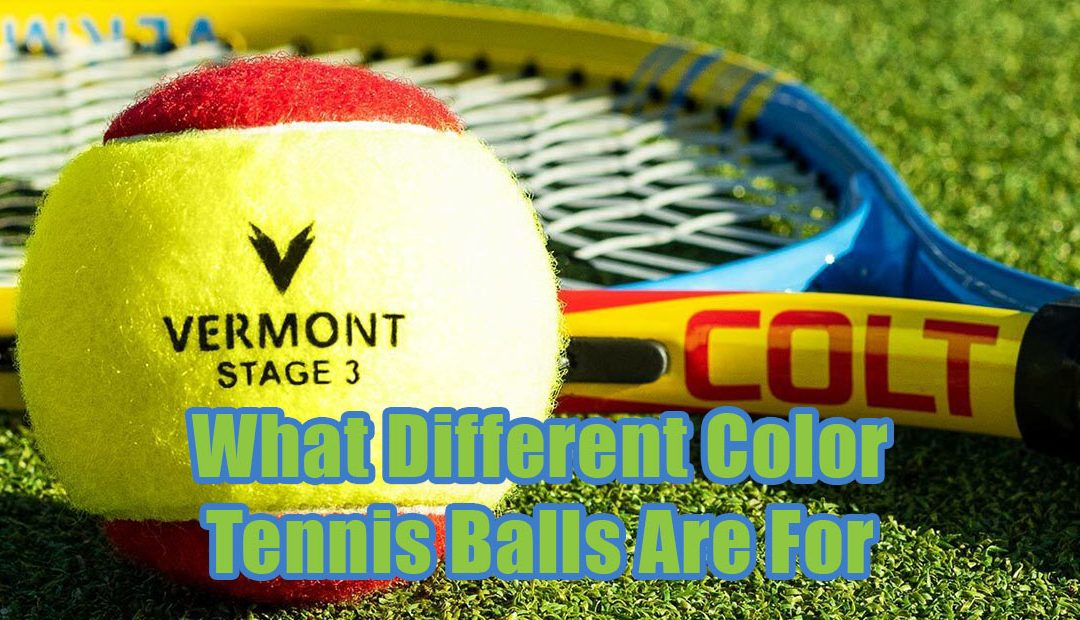 A tennis ball is a ball made specifically for playing the game of tennis. They come in a variety of colors for leisure play but are fluorescent yellow for organized events.

Each tennis ball has a white curvilinear oval surrounding it and is wrapped in a fibrous felt that alters its aerodynamic qualities.

The diameter of a ball is officially defined by the International Tennis Federation (ITF) as 2.57″ to 2.7″.

Which Colors for Tennis Balls Are Officially Acceptable?

The ITF only accepts the colors yellow and white, and the majority of balls produced now are an optical yellow fluorescent color that was first adopted in 1972 after studies showed they were more visible on television.

Why Are Tennis Balls Wrapped in Felt?

Tennis balls have a homogeneous felt-covered rubber composite surface and are air-filled. The ball’s flight characteristics are improved because the felt prevents flow separation in the boundary layer, which lowers aerodynamic drag.

What Does the Number On a Tennis Ball Represent?

In addition to the brand name, tennis balls frequently carry a number on them. This makes it easier to tell one set of balls apart from another set of the same brand of balls.

How Important is the Bounce a Tennis Ball Possesses?

Modern regulation tennis balls are manufactured without internal pressurization and are held under pressure (about two atmospheres) until they are first used; balls meant for usage at high altitudes have a lower initial pressure.

How Do Regulators Test a Tennis Ball’s Bounce?

A ball’s bounce is measured by dropping it from 100″ above concrete; at sea level, 68 degrees Fahrenheit, and 60 percent relative humidity. A bounce of 53″ to 58″ is considered appropriate. High-altitude balls exhibit distinct properties when tested at sea level.

What is the Play and Stay Tennis Program?

The “Play and Stay” program by the ITF aims to improve the way new players are introduced to tennis in order to enhance tennis participation all over the world.

To properly introduce the sport to both adults and kids, the ITF suggests a development that focuses on a variety of slower balls and smaller courts.

Why Do Players Learning Tennis Use Different Color Balls?

The slowest balls are bigger, unpressurized, or made of foam rubber, and they are either marked in red or with half-red felt.

The following balls, in orange, are regular-sized, unpressurized balls. The final ones, with green, are normal-sized under half pressure.

Here’s a breakdown of the different colors used for tennis balls and what their purposes are.

The red, orange, and green balls are made to move through the air more slowly and bounce lower to accommodate the player’s height and motor skills.

Using the standard yellow ball to compare the others to, the following video from Tennis Australia demonstrates the various ball rebound heights as the balls cross the net.

The ITF refers to this distinctive ball color as “optic yellow.” The color is identified as “Fluorescent yellow or Electric lime” and given the designation hex color of: #ccff00.

Tennis balls are technically yellow, but there’s a thin, hazy border between yellow and green – two similar colors that have sparked countless debates over what color they actually are.

Historically, depending on the backdrop color of the courts, balls were either black or white.

Wimbledon, however, maintained to utilize the customary white ball until switching to yellow balls in 1986.

The red foam or felt balls that are used at this point gave rise to the name “red tennis.”

Beginning players have an opportunity to position up and take a decent swing at the ball since this color ball bounces lower and moves through the air more slowly.

Players move up to the orange level after they feel confident playing at the red level.

This color ball represents a stride in the direction of the standard yellow tennis ball while still being enjoyable and playable for beginners.

For singles and doubles play, the courts measure 60′ by 21′ and 60′ by 27′ respectively. The net is at regulation height.

The green ball resembles the conventional yellow tennis ball fairly closely, but it has a little lower compression, which causes it to rebound off the court somewhat slower after a shot.

The green court measures the standard size of 78′ by 27′ for singles and 78′ by 36′ for doubles, plus the regulation net height is used.

Whether you’re an adult learning tennis for the first time or a junior player that simply doesn’t have the strength or ability to play the game at regulation levels, Basha Tennis has a program that suits individual abilities.

If you live in the Mountlake Terrace, Washington area and are curious about picking up the sport, stop by Forest Crest Athletic Club and check out our facilities for yourself. You’ll find that the staff, coaches, and members are willing to go out of their way to help you feel like one of the gang!