What Are the Different Types of Tennis Courts? 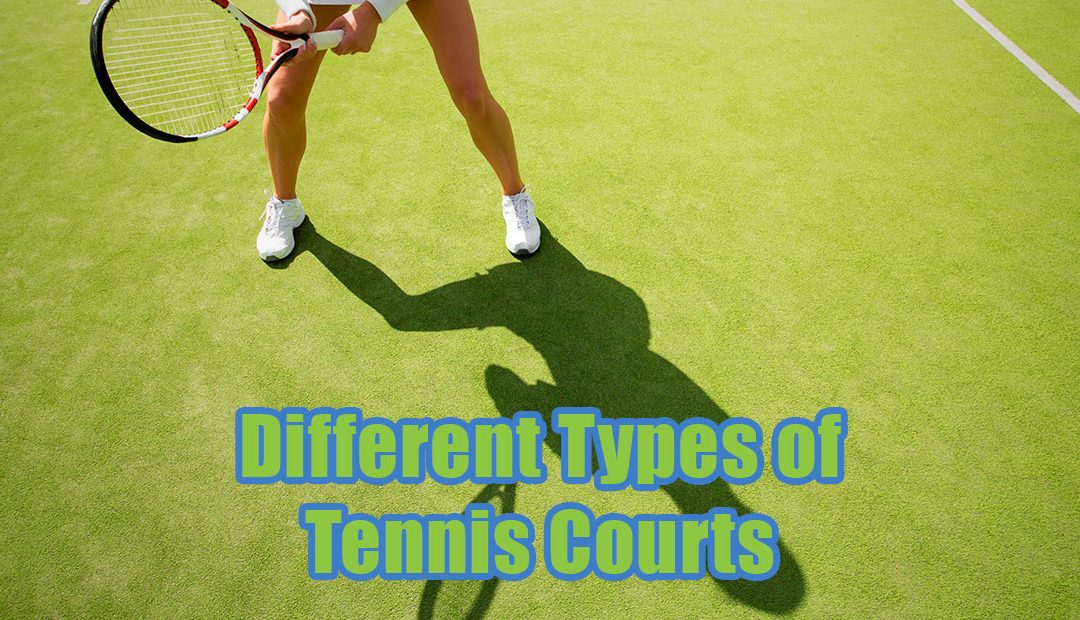 Some individuals think that different variations of tennis were played by the ancient Greeks, Romans, and Egyptians. There haven’t been any drawings or descriptions of tennis-like games found, but several Arabic terms from Ancient Egypt serve as potential evidence.

According to one hypothesis, the word racquet developed from the Arabic word for the palm of the hand, rahat, while the name tennis came from the Egyptian town of Tinnis near the Nile.

Apart from these two words, there is little evidence that tennis existed before the year 1000.

Most historians attribute the game’s invention to French monks who started playing a crude version of handball against their monastic walls or over a rope strung across a courtyard in the 11th or 12th century.

Regardless of where the game originated, it’s now one of the most popular sports, both spectated and played, throughout the world. Today, approximately 87 million people actively play the game on four main types of courts.

Below we take a look at the different types of tennis court materials, found at clubhouses and played on by pros at ATP and WTA tournaments, and how they differ.

While there are various surfaces that tennis can and is played on, when it comes to your local club, you’re likely to stumble upon one of just four – grass, clay, hard, artificial grass.

Each court surface has its advantages, but it’s well known that most pros don’t like playing on grass or the fake stuff and that they prefer to play on either clay or hard tops due to the consistency those courts offer. 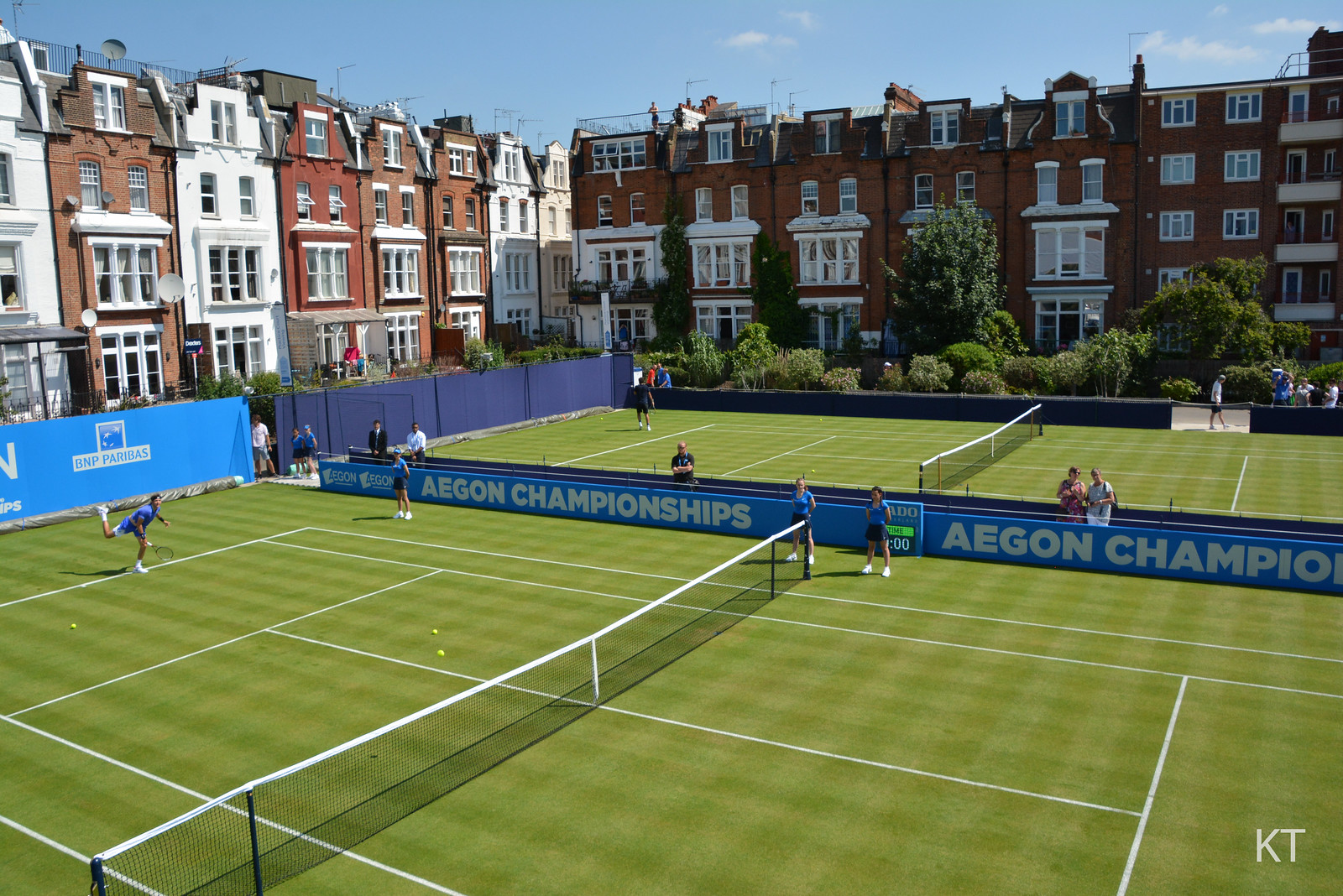 Tennis on real grass is known as “grass-court tennis,” as the name implies. Wimbledon, the third Grand Slam of the year, which was first played in 1877, is the climax of the grass-court season in the professional modern era.

According to historians, the game was first played on grass in the 18th century by the nobles on the lawns of their estates.

Up until 1988, the Australian Open was held on grass; after that, it moved to a new location and began on hard courts.

Grass court upkeep is time-consuming and expensive, which includes planting grass seed, watering, and mowing according to specific requirements. It takes a lot of work and goes above and beyond what most clubs do for their tennis court maintenance.

One characteristic of grass is how rapidly the ball bounces, while another is how much knee bending is required due to the ball’s low bounce. Rather than firmly bouncing up, the ball often skids off the ground.

Grass is known to be very sensitive. On a court where a few matches have been played, the bounce changes and becomes unpredictable. 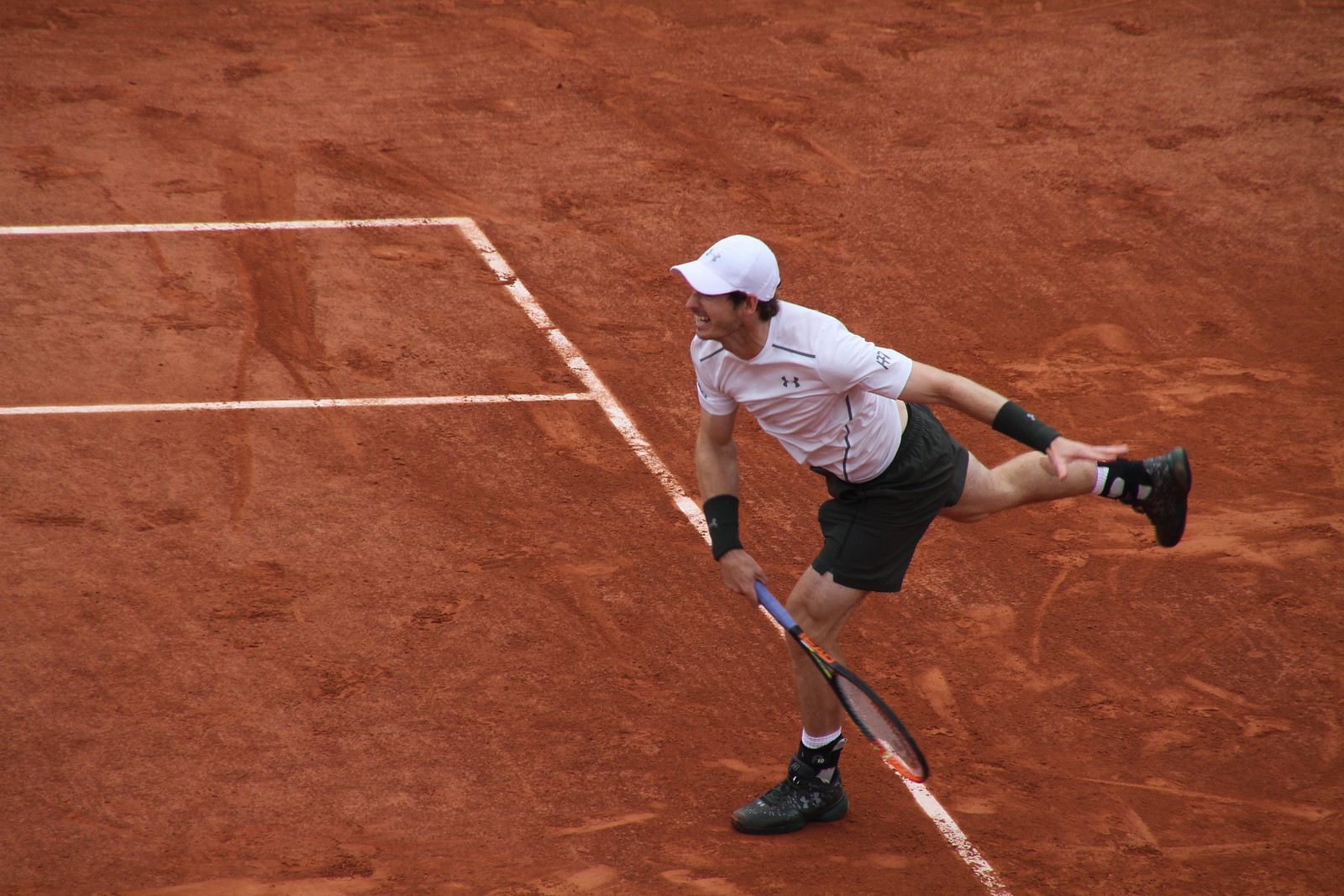 Clay courts are built from shale, brick, or crushed stone. This surface makes the ball move more slowly and bounce higher than other ones. As a result, rallies lengthen, which is advantageous for baseline players and those who like to play tactically by utilizing lots of spin and excellent angles.

The only Grand Slam competition that plays on clay courts is the French Open.

Red clay, which is more prevalent, and green clay, commonly referred to as “rubico,” which has a firmer surface, are the two main types. 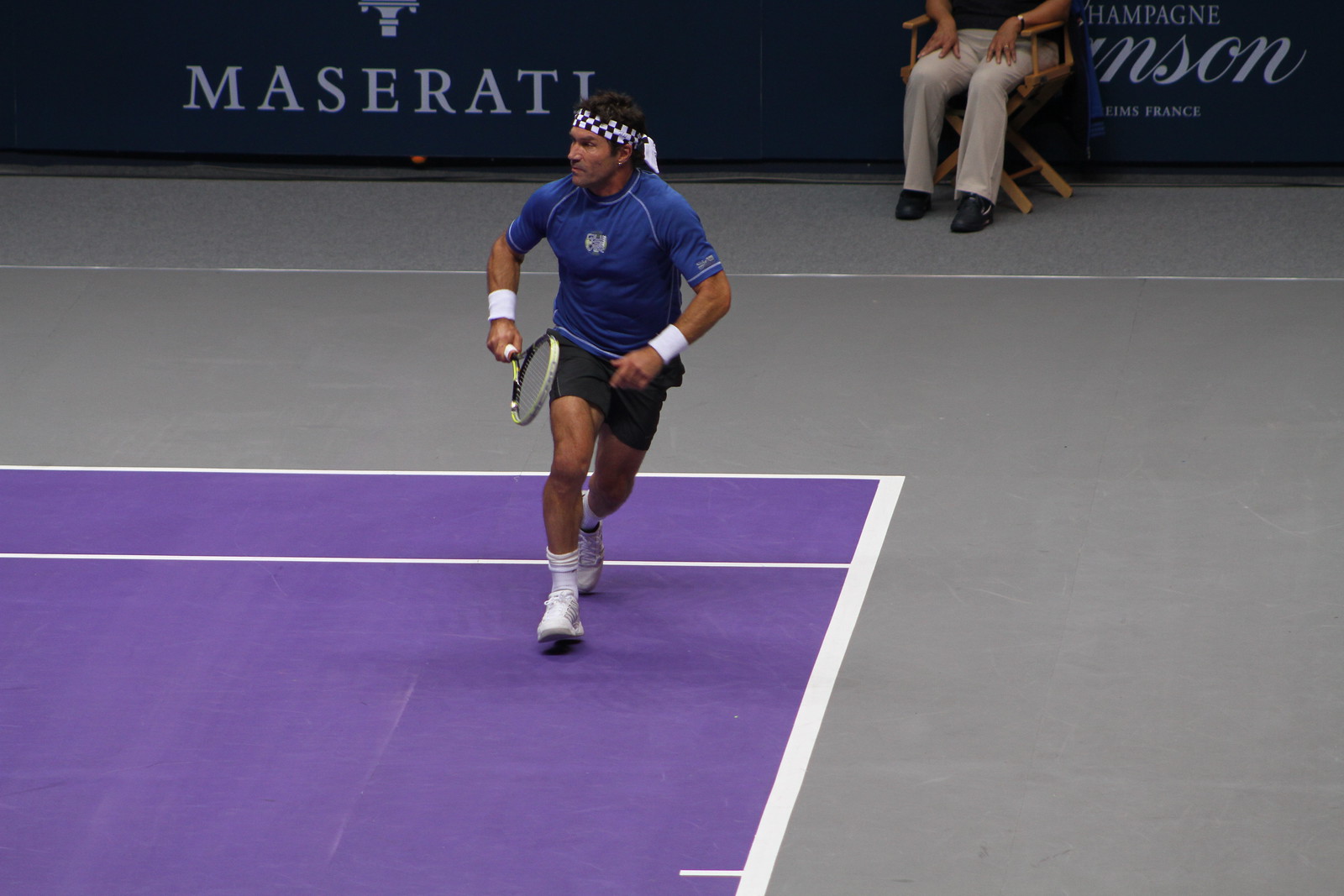 In order to provide more consistent bounce than other outdoor surfaces, hard courts are built of uniformly rigid material and frequently topped with an acrylic surface layer.

Although they are quicker than clay but slower than grass courts, hard courts can vary in speed. The amount of sand added to the paint has a significant impact on how quickly the ball slows down.

Hard courts have been utilized historically for the Grand Slams at the US Open since 1978 and the Australian Open since 1988.

Hard surfaces are also the easiest to maintain, provide the best bounce, and enable both offensive and defensive players to be successful. 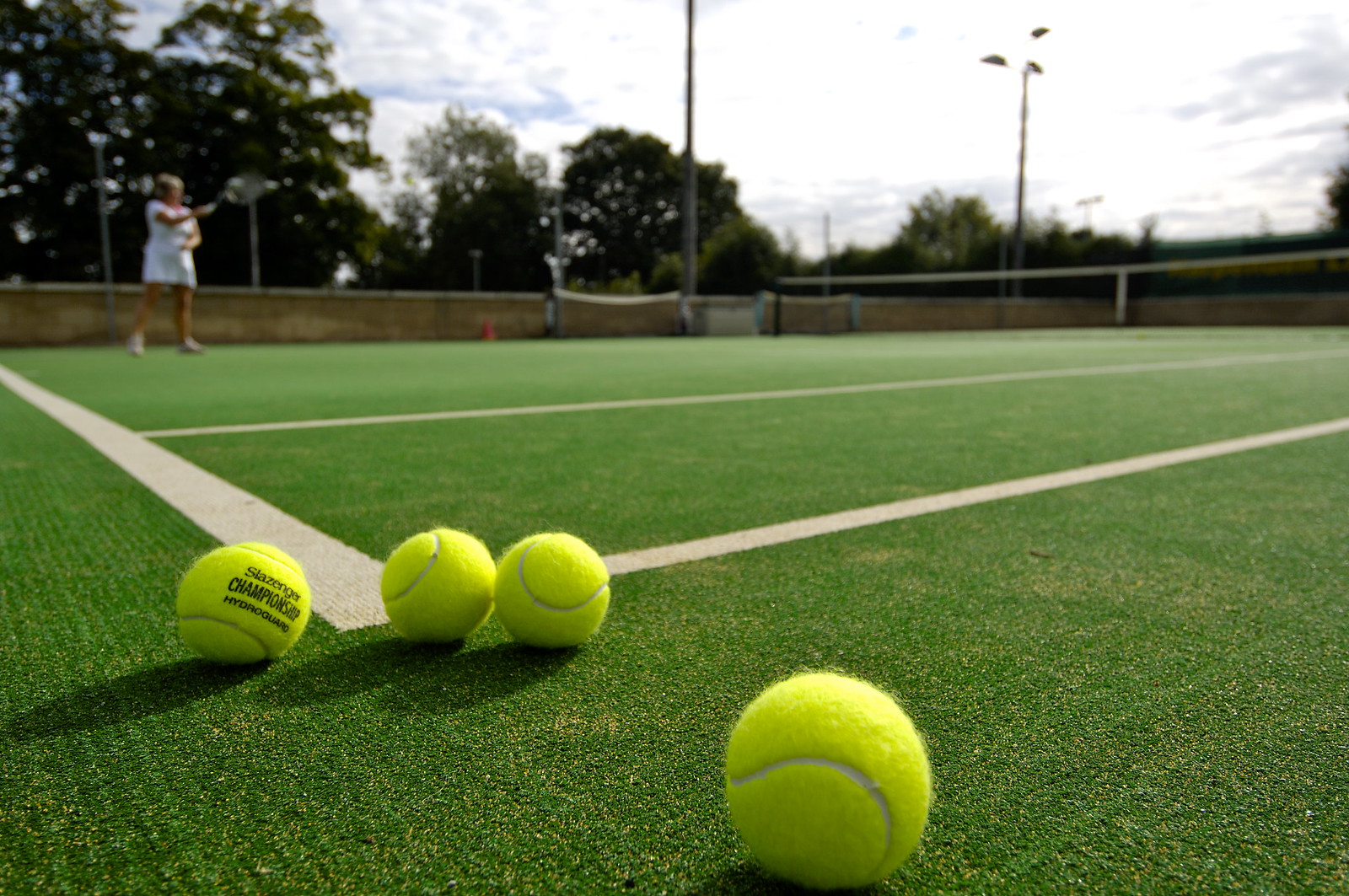 The quick regeneration of the surface after rain is one of the main benefits of artificial grass. In particular, a tennis court made of artificial grass dries very rapidly and is much less slippery when it rains than other surfaces.

The players can return to the court and pick up where they left off as quickly as possible, extending the court’s operating hours.

Artificial grass also offers a surface that is more constant. It is guaranteed that the surface will remain smooth due to a lack of variation in the thickness of fake grass.

A tennis court made of artificial grass won’t grow uneven or bumpy, as happens frequently with clay and real grass courts, for instance.

Are you or a loved one looking for a fun way to be active and make new friends? If so, tennis might be the right choice for you. Not only does tennis help with a healthy body and general mobility, those who play the sport regularly are known to live longer.

Learning to play tennis is also a great way to meet new people and, often, make life-long friends. When you take group classes at a club, like at Forest Crest Athletic Club, you get to know fellow students, members, staff, and coaches.

If you live in or around Mountlake Terrace and want to learn how to play tennis, click the following link to learn about the adult and kid’s group lessons taught at Basha Tennis. We’d love to have you join our tennis family.