Why Do Tennis Players Grunt? 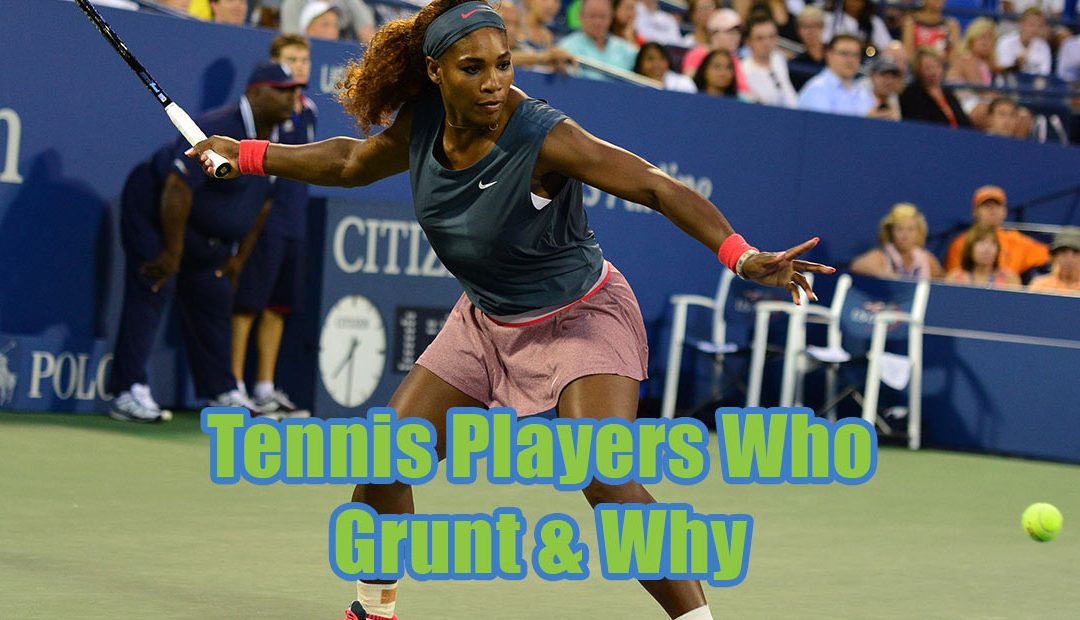 Grunting is, at times, a very loud noise produced by certain tennis players when hitting their shots – often referred to as “shrieking” or “screaming.” Both men’s and women’s tennis include it prominently.

A History of Grunting & The Advantage

At 2018’s Australian Open, Belarusian star Aryna Sabalenka was accused of grunting too loudly during her first-round defeat to Australian Ash Barty, igniting one of tennis’ recurring controversies.

Martina Navratilova, the former world number one, has previously said that grunting is a kind of cheating.

Navratilova stated Roger Federer doesn’t make a noise when he smashes the ball, citing him as an example of a good player who does not grunt. The issue wasn’t just one of distraction or discomfort.

Navratilova was worried that grunting muffled out the sound of the ball leaving the grunter’s racquet, preventing an experienced opponent from addressing his or her receipt of the ball and return stroke utilizing that hint as to power and spin.

Ivan Lendl complained about Andre Agassi’s grunting during the 1988 US Open: He said Agassi’s grunt was considerably louder when he went for a powerful shot and that it messed up his timing.

Aravane Reza protested to the umpire over Michelle Larcher de Brito’s “shrieking” during the 2009 French Open, prompting a Grand Slam supervisor to be sent to the court. Larcher de Brito was booed off the court after no action was taken against her.

Chris Evert, another former player, stopped short of calling it cheating, saying she wouldn’t go so far as to say it’s cheating, but believed the grunts are becoming louder and more shrill today with the current guys.

Grunting’s Justification by Many Players

If someone doesn’t like my grunting, they can always go, remarked Michelle Larcher de Brito, whose grunt had a decibel reading of 109. In a separate interview, she stated nobody has the authority to order her to stop grunting. Tennis is a one-on-one sport and she’s a one-on-one player. If the umpire has to punish her, then give her a fine. She’d rather be fined than lose a match because she couldn’t stop grunting.

“I’ve done this ever since I started playing tennis and I’m not going to change,” said former Wimbledon winner Maria Sharapova.

Serena Williams claims that opponents who grunt has no effect on her performance. She said she simply plays her game and grunts when she needs to. When she grunts, she’s not aware of it and it makes no difference to her whether her opponent grunts or not.

Bollettieri has denied training grunting as a distraction technique, claiming that it is a natural occurrence and prefers to refer to it as “exhaling.”

After Danish player Caroline Wozniacki (ranked number one in the world at the time) publicly accused Bollettieri’s students of grunting to cheat. WTA Chairman Stacy Allaster stated that the WTA would be talking to the Bollettieri academy about the prevalence of loud grunters from that institution and how it could be eliminated from the next generation of players.

A year later, a division of Bollettieri’s academy issued a document calling grunting “unsportsmanlike” and acknowledging that it obscures the sound of string impact (as Navratilova pointed out), resulting in an increase in an opponent’s decision error, and a slower response time.

Grunting is part of the rhythm for tennis players, according to Louise Deeley, a sports psychologist at Roehampton University. She said the times when players grunt assists them with the rhythm of how they’re hitting and how they’re pacing things. She continued to say they may feel, on the surface, that this is going to be a distraction to their game, that it is part and piece of what they do.

If you’re looking at reflexes in the legs and you ask someone to clench their jaw, believe it or not, the reflexes in their legs become brisker, that’s a well-known issue called re-enforcement, according to Bruce Lynne, a physiologist at University College London.

What Exactly is Grunting?

First, grunting was studied from the standpoint of an opposing player, who may find it harmful to their performance since it interferes with their ability to absorb information during shot preparation.

Second, the impact of grunting on the grunter’s own performance in terms of hitting has been examined.

Grunting may be deemed performance-enhancing for the grunter and performance-detrimental for their opponent in both cases.

Is There an Advantage for the Grunter?

Grunting has been shown to conceal key auditory information utilized by an opponent in some early experimental studies.

A research study invited participants to view video clips of a professional tennis player hitting the ball with or without an audio stimulation (a grunt). Their mission was to identify whether the ball was being hit to their left or right side as fast and correctly as possible. The grunt’s directional decision-making was shown to be slowed and inaccurate as a result of the grunt.

When applying the findings from the lab to the court, it has been hypothesized that a 30-millisecond delay in reacting when an extra auditory stimulus is present would result in a normal rally shot being picked up two feet later than when there is no grunt.

This puts greater pressure on the opponent and reduces their preparation time, both of which are detrimental to their performance.

It’s less apparent how a grunt affects performance. A well-timed grunt may conceal crucial aural information utilized by a player when the racquet hits the ball, as several professional players have anecdotally indicated. Another theory is that a grunt may divert a player’s attention away from the sound of racquet-ball contact and onto the grunt itself, impairing their timing.

Finally, a grunt may divert attention away from the visual information provided at racquet-ball contact. There is presently no concrete proof to back up any of these claims.

There is evidence that when the impact of a grunt is examined, striking performance improves. When highly skilled university tennis players groaned, their ground stroke hitting velocity increased by 3.8 percent.

When it came to serving, grunting players had a 4.9 percent increase in velocity. This resulted in “grunted serves” being struck at a speed of 4.35 mph (7 kph) quicker than those that were not.

There was an increase in force generation as assessed by muscle activity, despite the fact that the increase in striking velocity came at no extra physiological cost in terms of perceived effort and energy expenditure. Overall, research indicates that grunting is a performance-enhancing technique that can be sustained throughout a game.